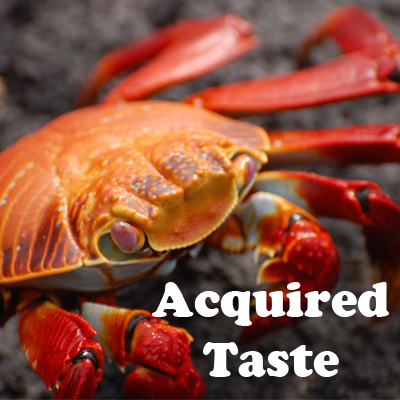 Pink meat pulls and stretches, contoured over protruding, blunt-tipped ribs; forming a fleshy marbled mass just above the bony sternum. The first rib is hooked through with a nail, leaving the entire slab of meat to hang heavy from the wood-paneled kitchen wall. Below it, dressed fowl with puffed chests and eyes outlined in crimson are stacked—no, nestled—their necks uniformly limp, dangling from the elevated bronze serving tray. In the foreground, five pears at varying stages of ripeness are splayed, almost an afterthought, like the oranges stacked in the background, toppling from the mouth of a copper pot. Fruit here is secondary; a rushed addition to the table.

Brightly colored food trucks line the exterior of Farragut Square, where men and women in tidy suits wait for falafel and tacos and too-sweet smoothies. It’s a series rapid exchanges. Cash and cards for white paper bags and Styrofoam boxes slick with grease. Garbage cans overflow with half-eaten meals and spotted napkins. A man in Capitals jersey picks through the array. The jersey has a cat scratch-style cut—a three-clawed slash, slash, slash—across the left shoulder. He finally chooses an apple, whole but bruised, and delicately wraps it in the folds of a plastic bag for later.

Iridescent pods are suspended from leafy branches, each member-orb covered in a delicate translucent film that contains the rich, red juice. Red currants, as these are, have a bite that goes from tart to sweet. Close by on the wooden butcher’s block is a bundle of artichokes painted with strokes that fade from violet to green to white. Their stalks cut at an angle. Their buds tight.

The voices of children, five or six maybe, transmit over my car radio. They’re telling me facts I’ve heard before, but these voices make me want to listen. “One in five children in the US struggle with hunger.” One voice, a boy’s soft voice, says: “My teacher tells me I can grow up to be anything I want. I want to be someone who doesn’t go to bed hungry.” I think of my favorite photo of my baby brother; he’s chubby-faced with a piece of chocolate cake (his first) smeared across his mouth and cheeks, and he is wholly gleeful. He’s never—we’ve never—gone to sleep hungry in our lives. I wipe my eyes in the rearview and promise this year to actually collect some cans or some small thing.

The table heaves under the weight of the spread: the bowl of golden apples, spiraled citrus peels, bites of bread torn from the loaf, a whole roasted chicken, briney olives, and, of course, the peacock pie. Part savory, part pastry, all pageantry—it’s a minced meat pie decorated with the head and neck (skewered through with a stick) and some of the shorter tail feathers. The pastry serves as a post-mortem torso; a darkly humorous delicacy.

On the steps of the National Gallery of Art, a woman clutches a cardboard sign, scrawled over with black Sharpie marker. “Need Money 4Food. Baby on the Way.” The hood of her jacket is pulled tight around her face, the drawstrings forming a loopy bow right beneath her chin. One hand rests on her swollen belly. “Anything—any little bit—helps,” the woman murmurs over and over. She and her unborn child starving in the land of plenty.

Ashlie Stevens is a freelance food and arts writer from Louisville, Kentucky. Her work has been featured in the Atlantic’s CityLab, National Geographic’s “The Plate,” Eater, and Hyperallergic. She is currently pursuing her MFA in Nonfiction Writing at the University of Kentucky. You can follow her on Twitter at @AshlieD_Stevens.