Today we’re pleased to introduce Pittsburgh poet Daniel Shapiro, who will be kicking things off at our December reading, Six Impossible Things for Breakfast. We asked Shapiro to tell us a little bit about himself, Acquired Taste style. 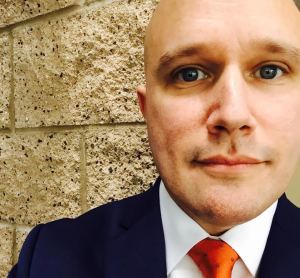 Why do you write about food?

I haven’t written about food all that much, but I like to do it because it’s not a poetry topic that has been done to death. It’s not break-ups or trees. I typically seek out offbeat themes, odd juxtapositions of words, etc., and food lends itself to these pursuits.

What’s the strangest meal you’ve ever had?

The strangest meal I’ve ever had remains the cheese fish they used to serve at my middle school. Most likely, it was accompanied by the overcooked stalks of broccoli. It consisted of a square, fried piece of what was said to be fish, and the cheese–not unlike Velveeta–was apparently injected into it, a la creme filling into a Twinkie. My friends and I have turned cheese fish into a mythical monster, of sorts, and I hope to have a cheese fish poem available for the reading.

If someone invented a cocktail named The Daniel Shapiro, what would it include?

It would consist of the most expensive, most rare bourbon available and nothing else. It would be the Sasquatch of drinks, putting Pappy Van Winkle 23 Year to shame, causing riots, making people forget about the Tickle Me Elmo massacres of old.

You can read some of Shapiro’s poetry, and even get a taste of him reading it, at Hermeneutic Chaos. If you like the sound of his voice, or just want to hear more about the mythic cheese fish, join us next week at Classic Lines bookstore for Six Impossible Things for Breakfast.

Daniel Shapiro is the author of How the Potato Chip Was Invented (sunnyoutside press, 2013), a collection of celebrity-centered poems. He is a special education teacher who lives in Pittsburgh. He interviews other poets while subliminally promoting his own work at Little Myths.